Rathert Stadium: One of a kind
Abel Loza

Baseball has always been a staple in this community and nothing exemplifies that like Rathert Stadium. Built in the 1930's as a part of the New Deal WPA project that saw Rather go up as a way to keep the people of Junction City employed during the Great Depression. Generations of local Junction City citizens have played at Rathert, which is why it makes the stadium so special. Not very many stadiums in the state are as old as Rathert which brings in a very special dimension to the story of this community. Rathert will celebrate its 78th birthday this summer, so now would be a good time to look back at the history of Rather.

Rathert’s story begins in 1936 when the local citizens of Junction City, wanted to participate in the Ban Johnson league, which was at the time the premier Midwestern baseball semi-pro league. The push for a baseball field was perhaps a way for the town’s people to spend a few hours not thinking about the devastation of the Great Depression. Whatever the main motivation for the building of a new field, the town received its wish and the official plans for the stadium were unveiled to the WPA office on September 21, 1936 and construction started later that same year. The main funding for the stadium came from the WPA, Work Projects Administration, which was a federal program started in the Great Depression to get unemployed people to work on public works, such as parks, buildings or roads. The total cost of the project, before inflation, came out to be $53,073.74.

There was a local fundraising complain for local citizens to buy bags of cement
“Accordingly, a campaign will be started within the next few days with a definite goal of 3,000 sacks of cement, which will put the sponsor’s contribution over the top. Store employees, railroad boys, highway workers, baseball, softball and football fans... will be asked to buy from one to fifty sacks of cement to help build the project along.” Originally constructed to hold all sports, Rathert stadium has always been primarily used for baseball. Made out of native limestone and wood, Rathert stadium was a true wonder and one of the major beauties that came out of the WPA in the state during the Great Depression. The field took its name from Arthur Rathert, the city engineer who was believed to have put the most effort into bringing this project to life and had been there since day one, talking to the WPA officers in Topeka for the passing of the project.

The first game at Rathert took place on July 18, 1937 with a full stadium (1,400) cheering on the local team, who took the filed with the nickname of the Jay Cees, an obvious reference to the initials of the town. Unfortunately for the local team, the atmosphere did not help their cause as the Jay Cees lost their very first game to the Concordia team, 8-6. The futility of the team did not last as the Junction City Ban Johnson team actually won the league in 1939. Although the Ban Johnson league was well respected, it was not the MLB. This meant that the Ban Johnson league did not pay much; many of the players on local teams had to have day jobs to be able to afford to play baseball, basically for fun, at night.

The Jay Cees continued to play in the Ban league team continuously until 1941, when the league was suspended until 1945 due to the outbreak of the war. Although the Ban Johnson league was suspended, but this did not mean that Rathert was empty. During the war, soldiers who were stationed in Fort Riley would organize Army sponsored teams and play in Rathert. These Army teams would usually play local citizens and just play to break the monotony of everyday army life and played for fun. There were some famous baseball players who stepped foot at Rathert, like Buck O’Neil, who was a great player in the Negro Leagues and later went on to become the first African –American baseball manager when he was hired by the Chicago Cubs in 1962.

After the war, Ban Johnson league play resumed on June 2nd, 1946 against the Abilene team. The Junction City Union wrote about the event on June 1st of that year, “A crowd of 1,200 or more fans is expected for the opening game, with the even the drug stores closed for the festivities. Admission will be 45 cents for adults because increased federal taxes and high expenses that before the war.”

Rathert has basically been untouched since its original building besides some renovations which occurred between 2002 and 2005, updated all of its facilities to accommodate newer generations of fans. So if you need something to do this summer, go and enjoy the beauty of Rathert and appreciate its history. Not many towns in Kansas can boast about their historic baseball diamond. 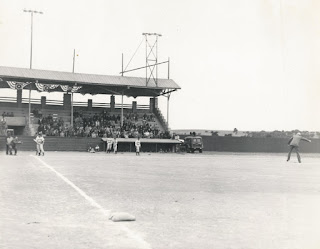 This picture is from the first game played at Rathert after league play was suspended due to WWII. The first game back took place on June 2nd, 1946.
Posted by Geary County Historical Society at 9:42 AM